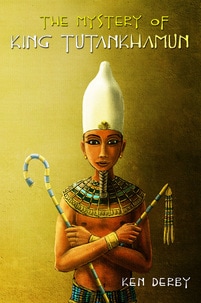 During Egypt’s Eighteenth Dynasty, the Valley of the Kings was used as a royal graveyard. Over the next 3000 years, all but three tombs were discovered in that hot, barren valley. By the early 1900s, most archaeologists believed the three missing royal burial sites were located somewhere else. One of those tombs belonged to Tutankhamun, Egypt’s boy king.

However, Howard Carter, an archeologist, and George Herbert, a classic English aristocrat, believed differently. The two met for the first time in 1909 and discovered that they had something in common: a strong desire to find the location of Tutankhamun’s tomb. They formed an alliance and set their sights on this seemingly unattainable goal.

With imagined dialogue, Ken Derby reveals the true-life adventure story of Howard Carter, his discovery of King Tutankhamun’s tomb, his attempts to unravel the mysteries surrounding this ancient Egyptian child king, and the puzzling “curses” that seemed to follow many involved with the tomb’s discovery.