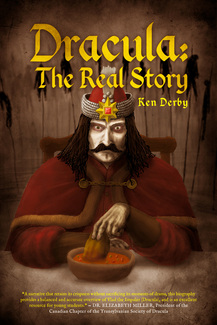 Dracula: The Real Story follows the intriguing life of the notorious Vlad Dracula, a little-known fifteenth century Romanian prince. Dracula’s saga as hostage, fugitive, and prisoner molded him into an influential and feared warlord caught between the powerful Ottoman and European Empires. His clever and ruthless war tactics — which earned him the savage nickname Vlad the Impaler — helped preserve his homeland and earned him respect from his enemies and compatriots alike.

Many people today think of Dracula as a bloodsucking night demon that terrorized the living. Many Romanians of the fifteenth century considered him a hero who gave his life for his country. But to others, he was one of the cruelest villains of all time. Was he a bloodsucker, a hero, or a villain? Perhaps he was all three.

“A narrative that retains its crispness without sacrificing its moments of drama, this biography provides a balanced and accurate overview of Vlad the Impaler (Dracula), and is an excellent resource for young students.”—DR. ELIZABETH MILLER, President of the Canadian Chapter of the Transylvanian Society of Dracula

“Want to get juveniles interested in history? Begin with Dracula: The Real Story: there's no better way of creating this interest than with a work of nonfiction that uses the specter of a real-life 'vampire' and then brings it to life with vivid, rich and interactive descriptions! Dracula: The Real Story is a juvenile biography at its best: and because the subject involves a somewhat sinister figure, it'll attract more leisure readers in the 9-12 age group than most biographies.” - D. Donovan, eBook Reviewer, Midwest Book Review