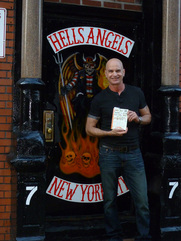 The New York City chapter of the Hells Angels is humorously featured in my book entitled The Top 10 Ways to Ruin the First Day of School. On June 26, 2012 I stopped by to visit the Hells Angels when I was in New York City. I chatted with one of the members for about 15 minutes and gave him a signed copy of my book. I asked him if he would pose with me and have a picture taken as I handed him the book. He graciously said, "Sorry, but I don't want to be in the picture because that would mean that I endorse the book, and since I haven't read it yet, I cannot endorse it." An intelligent answer from him . . . and I made an intelligent decision not to argue the point with a Hells Angel. :-)